AusACPDM | About us | Past presidents

James is currently Deputy Director, Medical Services, Women’s and Children’s Health Network, and part of the Network leadership team, in combination with his busy clinical role as Head of Paediatric Rehabilitation. In addition to being immediate Past President of the Australasian Academy of Cerebral Palsy and Developmental Medicine, James is a founding Executive member and Treasurer of the International Alliance of Academies of Child Disability (IAACD).

Part of James’ work in the role of AusACPDM President has been to increase the reach of AusACPDM to the wider Asia-Pacific region, to connect with an audience of clinicians and researchers in the fields of Cerebral Palsy and other childhood-onset disabilities. James teaches on a regular basis in neighbouring countries, including Sri Lanka, Malaysia and Singapore.

As an Associate Lecturer at Flinders University, James has combined clinical and research interests to focus on the assessment and treatment of complex movement disorders in children in particular with cerebral palsy, and has published in this area, with a special interest in dystonia in cerebral palsy. He oversees the medical training of registrars and advanced trainees within his Department, this ensuring the next generation of Doctors are well equipped to improve the lives and abilities of children and young people with disabilities.

James lives in Adelaide with his wife and teenage sons, and when not trying to juggle too many commitments at one time in work, can be found chasing after his own wayward golden retriever and/or children around the city!

Sarah is a physiotherapist who completed her training in Western Australia. She worked at Fremantle Hospital and Princess Margaret Hospital for children before moving overseas in 1988 to take up senior roles in an American–run hospital in the middle east and, in 1990, accepted a clinical and service development role in the Handicapped Children’s Association in Saudi Arabia. The Gulf War interrupted Sarah’s residency there, and she returned to Princess Margaret Hospital in 1991 to take up the position of Section Head Physiotherapist.

Her higher degrees and eventual PhD, along with her dedication to teaching, training and service development led Sarah to work within the Schools of Physiotherapy at both Curtin University and The University of Notre Dame, and eventually to accept a position at the University of Western Australia where she established and coordinated the Graduate Diploma in Neurological Rehabilitation (Paediatrics) within the Faculty of Medicine Dentistry and Health Sciences.

Alongside her fulltime management and clinical commitment, Sarah has continued an active clinical research program. Her research focus has been on spasticity management, cerebral palsy, hip health and maintenance of the healing environment.

Sarah has been an active participant in the Centre for Research Excellence in Cerebral Palsy, and a strong advocate for Knowledge Translation activities and for development and mentoring of the next generation of clinicians and leaders in health and disability.

Sarah’s roles within the Academy have differed across the years. She has been a Director of the Board since 2004; has been on multiple Conference Committees and Scientific Committees; has led the Conference Scholarship Committee since its inception; and is currently part of the International Affairs and Strategic Alliance Portfolio. She was the Academy representative in establishing the International Alliance of Academies of Childhood Disability and serves on the Steering Group establishing the Global Professional Education Program in Childhood Disability. During 2012 to 2016 Sarah’s focus was to enhance the Academy’s governance and reporting structures, oversee the creation and ratification of a five-year Strategic plan, and to further open and expand the circle of influence to include more members in Academy activity and direction.

Decades ago, Sarah had the honour, as a very novice researcher sitting at a post conference function, to be part of a casual conversation when Professor Dinah Reddihough and Dr Peter Chauvel chatted about the need for ‘our own Academy’. She has been committed to helping make this a reality and continues to remain engaged in growing and developing it to meet the educational and networking needs of fellow professionals in our field, with the ultimate goal of improving and optimizing the services for people with CP and their families.

A paediatric rehabilitation specialist, Associate Professor Adam Scheinberg was President of the AusACPDM between 2010 and 2012.

Together with the Statewide Program Manager, he has led an increase in the size, capability and geographic spread of the VPRS, with 8 centres across Victoria, including 6 regional sites and 2 tertiary sites with 20 beds for inpatient rehabilitation. A key part of the VPRS model has been increasing therapy skill and sustainability in regional areas, in collaboration with local general paediatric networks. Adam’s dedication to teaching and service development, particularly in regional Australia, was recognised in 2016 with the Royal Australian College of Physician’s Medal for services to rural and remote Australia.

Adam has led an active clinical research program, alongside his busy clinical activities, for the past 20 years. His research focus has been on the management of childhood and young adult disability, specifically focused on cerebral palsy, acquired brain injury, and spinal cord injury. More recently he has been involved in integrated translational research for adolescents with Chronic Fatigue Syndrome exploring the incidence, causes and varied approaches to treatment.

He chairs the knowledge translation initiative within the Centre for Research Excellence in Cerebral Palsy, which incorporates a unique knowledge fellowship program supporting future leaders in the field, and is on the steering committee for “A Framework for Action. Melbourne Knowledge Translation and Research Impact Framework”, a cross campus initiative aimed at improving Knowledge Translation within the hospital and university precincts.

Dinah Reddihough first contacted Adam about becoming involved with the AusACPDM over 15 years ago, for which he is very grateful! Since Co-convening the Inaugural Conference with Natasha Lannin in 2002 he has participated in a number of roles including Board member, Conference Convenor, and Scientific Committee member. He currently chairs the Portfolio for International Affairs and Strategic Alliance.

Adam lives in Sandringham in a rambling Edwardian house and garden with his wife, a contemporary artist, their two teenage children, an Australian Shepherd and five chickens. Luckily he is a keen gardener. It has been his great privilege to have been associated with the AusACPDM and all those that have been involved in its development.

A paediatric orthopaedic surgeon, Professor Susan Stott was President of the AusACPDM between 2006 and 2010.

Susan is based at the Department of Surgery, Faculty of Medical and Health Sciences, University of Auckland and is Service Clinical Director for Paediatric Orthopaedic Surgery at Starship Children’s Hospital.  Professor Stott gained her MB ChB in 1982 and, in 1988, was one of the first two women in Australia / New Zealand to be awarded her Fellowship of the Royal Australasian College of Surgeons (Orthopaedic Surgery).  She went on to complete her PhD at University Southern California, in Los Angeles and, after a period of time in the United States, was appointed to Starship Childrens Hospital in 1997 as Senior Lecturer. In 2012, she was promoted to full Professor, joining a very small number of women full Professors of Orthopaedic Surgery worldwide.  She was Editorial Secretary for the New Zealand Orthopaedic Association from 2006 -2011 and served a six year Ministerial appointment to the Board of the Health Research Council of New Zealand from 2007 -2014. From 2009 -2010, she chaired the Awards committee of the American Academy of Cerebral Palsy and Developmental Medicine and, from 2010 to 2011, the Musculoskeletal Medicine Panel for Health Workforce New Zealand.  Susan is a current Examiner for the final fellowship examination for the Royal Australasian College of Surgeons.

Her major research interests are in the area of physical disability in children and the impact of acquired neurological disorders such as cerebral palsy on musculoskeletal functioning in childhood. She has received funding from the Health Research Council, Lottery Health, Neurological Foundation and the Cerebral Palsy Society of New Zealand to support her research.  Most recently, Susan has become a Chief Investigator on the Australasian Cerebral Palsy Clinical Trials Network (AusCP-CTN), which is a Centre for Research Excellence (CRE) funded by the National Health and Medical Research Council, 2016 -2021. In 2004, she received a Scientific Fellowship Australasian Faculty Rehabilitation Medicine (awarded for services to rehabilitation) and in 2008, the Gillies medal from the New Zealand Orthopaedic association. In 2018 she was awarded the inaugural Transformative Practice Award by the AusacPDM.  The intent of the Transformative Practice Award is to acknowledge a health professional who actively facilitates the translation of research into practice and encourages colleagues to be evidence-based health professionals.

A pioneering clinician, researcher and educator, Professor Dinah Reddihough MD BSc FRACP FAFRM AO is recognised as a key force for change in the field of developmental medicine. Dinah was one of the founding members of the AusACPDM and our first President. She held the position of AusACPDM President from 2002 – 2006.

Dinah has been a paediatrician involved in the clinical care of children with disabilities, particularly cerebral palsy, for more than thirty years. She is a consultant paediatrician at the Royal Children’s Hospital, Melbourne where she was Director of the Department of Developmental Medicine from 1986 until 2011. In addition, she is an Honorary Professorial Fellow in the University of Melbourne, Department of Paediatrics, and a Principal Research Fellow at the Murdoch Children’s Research Institute where she was Group Leader of the Developmental Disability and Rehabilitation Research group from 2000 until 2016.

Dinah has received multiple awards, including:

As part of her commitment to improve knowledge and promote best practice in the field of cerebral palsy and developmental medicine, Dinah has developed a multidisciplinary research program focused on gaining an improved understanding of the causes and outcomes of childhood disabilities. She had the vision to found the Victorian Cerebral Palsy Register in the late 1980s. It has since grown to be one of the largest single population-based cerebral palsy registers in the world, contributing to over 100 research projects and publications (as of June 2017).

To take it to the next level, Dinah founded “Solve! At the RCH!”, a centre of developmental disability research’, in 2004. Its aim was to promote and raise funds for disability research at the Melbourne Children’s campus. Since then, the number of researchers working in the field and the disability-related research output from the campus has grown exponentially, and the centre was successful in securing funds for Australia’s first two Chairs in Developmental Medicine appointed in 2011 and 2016. These two positions will ensure ongoing research will be undertaken in the field of developmental medicine at the Melbourne Children’s campus.

To date, Dinah has been awarded 68 research grants totalling $6,845,776, including leading the first NHRMC-funded Centre for Research Excellence in Cerebral Palsy (2013-18), which is bringing together leading researchers, clinicians and consumers in a concerted effort to bring about change in the management and treatment of cerebral palsy. She has authored 167 peer reviewed publications, including 151 journal articles and 16 book chapters (as of June 2017). She is passionate about teaching students from a range of disciplines, and has supervised many higher research degree students, including PhD students, to completion.

Committed to advancing understanding & awareness of evidence based practice in childhood physical disability.

Now HERE is some exciting news!! To celebrate the diversity within our community of people with a lived experience, we are calling for original photos of people with #CerebralPalsy & other #Disabilities doing things they love. Share your photos to enter. 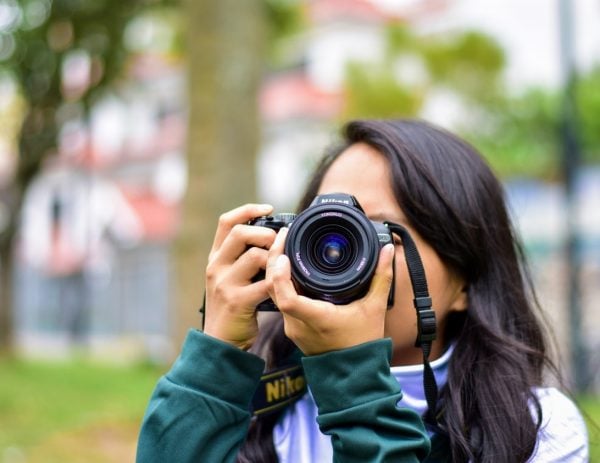 Share your photos to help the AusACPDM celebrate our diverse community of people with a lived experience “doing things that they love” The...

A tough choice by our European friends @EACDtweet, visit http://www.eacd2020.org/ for updates on the postponed conference in Poland. 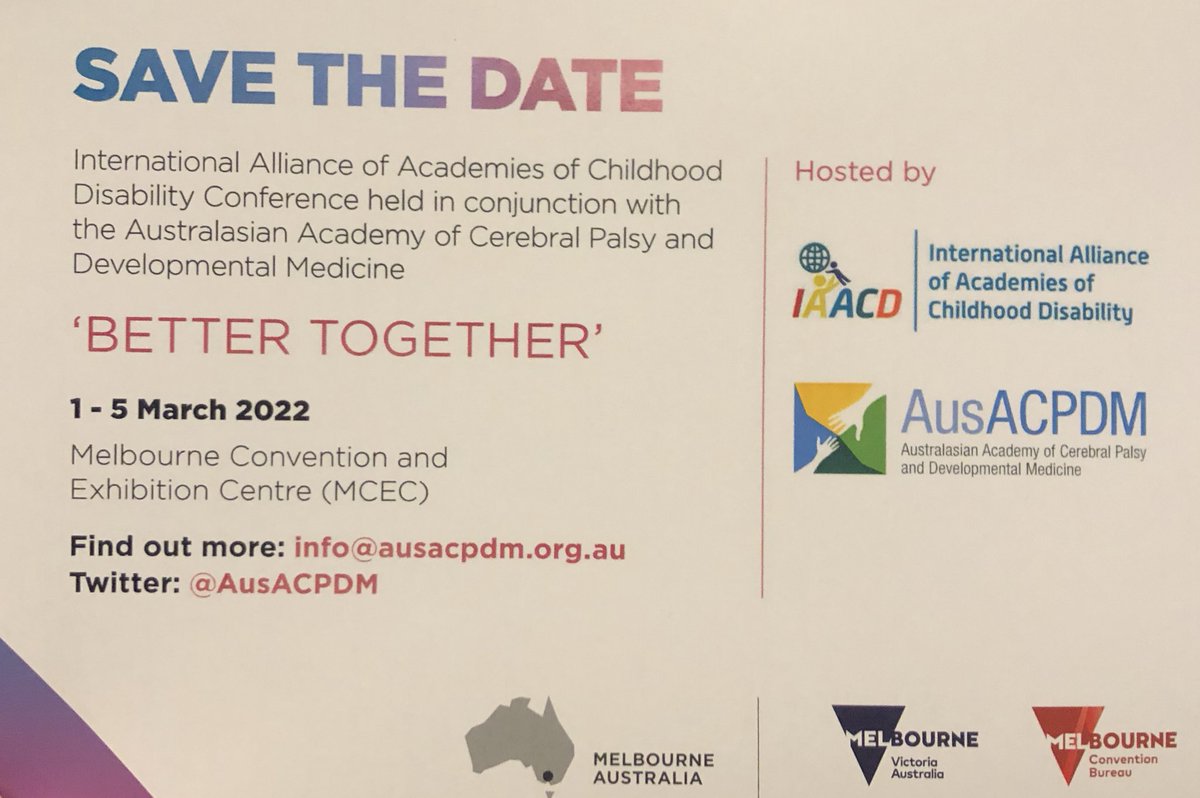 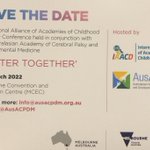